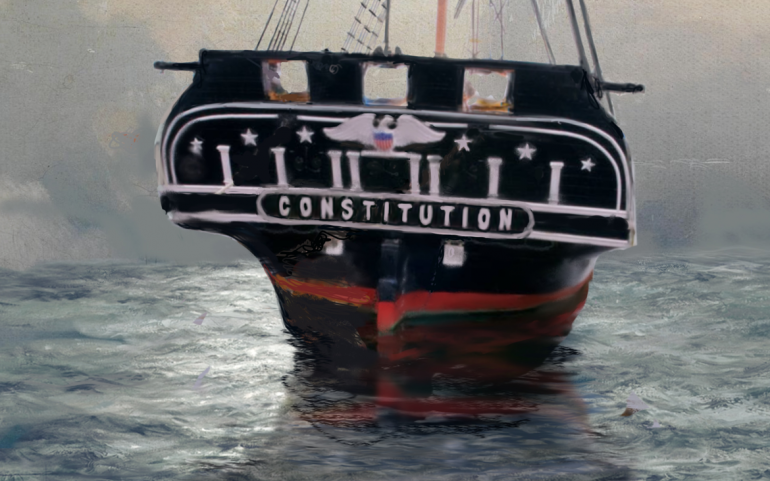 We are in the midst of a national emergency, and the elections in November will signal whether America is still serious about being a democracy.

A President is actively attacking democratic structures and norms while intentionally stoking racial tensions. Civility itself is endangered. Our elections are not secure and voter suppression is on the rise. There is an active campaign by a foreign government to interfere directly in our discourse, sow chaos and impact our vote. Dark money is everywhere. And on top of all that, a good third or more of the country does not believe any of the above. And they will not believe it for the foreseeable future: right wing media will continue to spin lies and paint alternative realities, facilitating doubt and muddying facts.

In other words, the democracy is in peril. Our ship is sinking.

A Metaphor: Our Ship of State
America is a majestic ship - constructed in the late 1700’s; worn-in, but still seaworthy. We (the passengers) co-own the vessel and hire the crew. For the most part we agree on certain things: people should have a right to live peacefully; we should come together in times of distress and when our values are threatened; we should treat each other fairly and aspire to provide everyone with access to essential resources needed to exist free of suffering.

There are many destinations to sail toward, and we are generally split between a few options. We disagree - often passionately - about which island to head for.

But at the moment we have a bigger problem than arguing over where to steer. The crew – led by an unpredictable and arrogant Captain – has started sabotaging The USS America: disrupting the communication systems, drilling holes in the hull, hoarding rations for allies. They’ve started false rumors to pit groups of passengers against each other.

The ship is taking on water. Systems are in disarray. Communications are down. If we argue right now about which island to go to, we’ll be arguing as the ship sinks into the cold, dark waters of the night. We’ll never see any island.

So, we are left with a choice. Do we, the passengers and owners of the vessel, band together to save the ship, or do we keep arguing about which island to steer toward? Hopefully the answer is obvious.

We, the rational passengers, must see past our ideological differences and band together to see that our ship gets repaired. This will require replacing all of the sycophantic crew members with people who have the moral foundation and the guts to wrestle control of the ship's systems from the unprincipled Captain.

Operation "Rescue America"
First, we the passengers need to define a plan: a set of policies and principles that we expect the next Congress to take immediate and decisive action on, to ensure our vessel remains seaworthy.

Second, we need to replace all crew members who have aided and abetted the sabotaging of our democracy with honorable citizens who will commit to doing the repair work. The GOP in its current form simply cannot be trusted with legislative control or executive oversight. They must be replaced with Democrats in massive numbers.

As we vet candidates during this campaign season, we should ensure that they are ready to engage in the hard work ahead. Keeping in mind that the next Congress will have the unique historical role of shepherding our very democracy, here is a draft action plan for their repair work and the rhetorical/ethical postures they must take:

The fact that the ship is taking on water has - at the very least - awoken the passengers to the reality that America can actually sink. Our appreciation for the builders' original vision has been renewed - but the sabotage wrought by Trump & the GOP has also exposed some long-concealed (or long-ignored) vulnerabilities.

What if American citizens of disparate ideology took a step back to survey our ship's damage and decided to come together and demand that our elected officials actually fix what needs fixing?

What if rational voters rallied around these ideas and measured 2018 candidates by their commitment to a platform of repair?

​What if Americans of all political stripes embraced our joint responsibility to address the current crisis in our democracy, and mobilized to expel its saboteurs so that America could set course for a more noble future?

Let's make 2018 mean something. Commence Operation Rescue America. Remember: we own this ship. This is our ship. So let's fix it. Together.