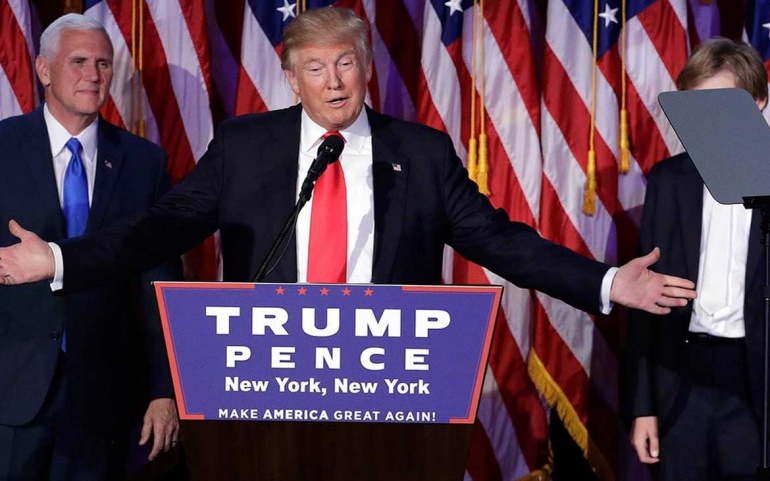 So, Democrats it's election night 2016, I’m excited I’m feeling confident going into the polls. I’m excited about voting for our next president Hillary Clinton. I, and so many others thought for sure we would have this election wrapped up a little after 8 PM. We were so wrong and I do wish to apologize I should have done more to ensure we got Hillary Clinton elected. Maybe it would have made a difference maybe it wouldn’t have, I really do not know. I watched the results come in at a bar; I would not be drinking until well after all the states were called and after the results were in drinking I did. We know what happened that frightful night, and how this nation has forever changed we may never fully know. We do see how the nation has changed. We see it everyday. It becomes do we allow them to change us, at this point; we can’t for if we do they win.

What follows is what I have done since Mr. Trump become the leader of the “free world.” It's still free at the time of writing this but who knows if it will remain free that's up to us.

Donald Trump is sworn in and the Resistance begins.

We are over a year out… we still have several more years of this administration unless Bob Mueller saves US all from his destruction. I was one of those people branded as a left-wing radical liberal reactionary before the election when I was saying to people that this was a battle between good and evil. I wonder how many of those people still think that I am a left-wing radical liberal reactionary when we’ve seen the type of chaos and destruction and decay that comes from having a chaos President who does not seem to understand American values here at home or abroad. I’ve read countless books focused on how to ensure that we see this resistance though and how we ensure this never happens again to this great nation. One of those titles was Radical Hope, a book I still go back too. Pick it up and you’ll be inspired to carry on and to fight for another day, for to lose hope is to lose all these battles.

Back to how this president doesn’t understand American values at home and abroad.

When it came to calling out terrorists in Charlottesville he couldn’t he wouldn’t. I have an uncle who fought in Iraq and Afghanistan he’s not an Obama Loving Liberal. He doesn’t like what he hears from this White House. He’s not the type you’d want to get into a fight with, while I reject violence, I will defend those who take a stand against these domestic terrorists, for if one side is engaging in violence the other side has a right to defend itself. If you take a hard look at the Charlottesville terrorist march, ANTIFA didn’t show up with guns, that was the terrorists. ANTIFA showed up with their fists, and they used them, and I can’t really blame them. If that makes me defending violence then so be it, I’d rather defend violence than defend terrorists. Trump came out and stated “both sides,” the terrorists drove a car into protestors who were protesting terrorism, they killed Heather Heyer. Heyer is someone who is more American than those terrorists who marched in American streets and someone who is more American than this president and those who serve in his administration. Mr. Trump couldn’t condemn these people because they are and still are welcome in the Trump Republican Party, but I’m sure he’ll condemn me for writing the above about ANTIFA. That’s fine because that was the day that he stopped being MY President. Yes, Mr. Trump, I was one of those Democrats who was rooting for you, and for the rest of the clowns, you’ve decided to make part of your administration but no more. Because I am not like you, in part because I stand up for actual American Values.

Values that say we don’t ever ask for friendship or forgiveness from those who wish this nation and its people harm. We don’t We Won’t and We never Will.

This wasn’t the only thing Mr. Trump did which showed he doesn’t understand American values, his entire presidency has been one built around the notion that he isn’t like other presidents, that he doesn’t agree with Our Founding Documents. The Constitution. The Federalist Papers, hey Trump ya ever hear of the Federalist Papers. I doubt it. But that Constitution is a beautiful thing, and that document is going to be your downfall. That document that you soon will be calling a rag, gave us the right to criticize you, without fear of retribution. You can’t sue me! You are a politician, I’ll let Jeff Sessions pull the case for ya to read, just so it distracts him from revoking rights to people who are Protected Classes. Trump doesn’t support a free press, he calls it fake news, the bedrock of our nation is a free press, and he gets to piss on that bedrock every day he is occupying the oval office. Just another American value he refuses to share.

When it comes with dealing with foreign policy this President has decided to cozy up to those who wish America ill, just take a look at his tweets, hell rewatch the O’Reilly interview where he demands America look inward. Trump is the biggest American apologist we have ever had as a president, and at some time in the near future hopefully, his party will wake up and see that for what it is. I won’t apologize for this nation, not now not ever. When will Donald Trump stop smearing our troops and the flag of this nation? Will it be while he is still the president, or will it be when he’s removed from office? Will it be when he is forced to resign or will it be when he is impeached? Or when the majority of Americans decide that pussy grabbers shouldn’t have a seat at any American table.

Flash forward to present day. It’s a Sunday, the previous Tuesday we saw elections, and we the Resistance just thoroughly sent a message to the Trump Republican Party that we are Back and that We Will Stand Up and Fight for Our American Values. This resistance is going up, up with Justice. Up with Democrats, Up with the Rights of All people. This is where the Resistance is going, and you too should be a part of this resistance. Wherever there are those who wish to challenge American Values, They will be met by the Resurgence of An American Resistance that those in D.C. have yet to see the proportions of, We Rise. Together We Can build up this nation and her people and together we will.

We rise to rebuild rejuvenate and restart the American Dream so more of our fellow Americans can have a piece of that American Dream, and we need all Americans to be on board. Whether you voted for Hillary Clinton or not, it’s a great time to embrace this American Resistance and this American era of revitalized Civic Duty.

Something more: To those on the other side, I’m here I’m willing to listen are you? Are you honestly willing to listen? To sit down and have that cup of coffee as my Republican friends who are mentioned above are willing to do. If not then I hope someday in the near future you are, because at the end of the day this nation is counting on it… it’s counting on all of us because Patriotism isn’t an act of being, it’s an act that requires action. Saying you’re an American isn’t enough in these times of Existential Threat to the Republic. It isn’t enough, being an American requires active engagement with this republic if it is to survive.

I am hopeful for this nation. I am hopeful by seeing the millions of people rising up and speaking out against this administration which has a terrifying neglect of reality and a seemingly terrifying respect for fascistic ideas. It is really the type of stuff for a good novel on a cold November morning, it is the type of stuff Trump decries as fake news. What he hates, is everything that makes America the best and brightest nation of nations. The fact that he hates a free press, makes our press and those who write and even the opinion writer like myself wake up and relish in the fact that we get to take on Trump and his clowns who serve with him and who serve at his pleasure. I take no pleasure in having to write about a nation that appears to be losing its edge, but then again I remember to never ever doubt for a minute that this nation is unlike any and all other nations. That this nation confronted its sins and has attempted rather terribly to solve them that we as Americans are still trying to solve them, that this is at the end of the day a long walk to a more fair and just and righteous nation and as frustrated as I and young people are at how stubbornly slow this nation moves we must always remember time is on our side. That together we can fix it, together we believe that America’s brightest days belong to those who look to the future and not to its past. Mr. Trump your days of trying to send this nation backwards are coming to an end, I just hope for a correction before it’s too late for you and those who follow you blindly.

While I do believe that Donald Trump is part of the root of evil rearing its head in this nation once again I understand that many Republicans are my equals. That the vast majority of Republicans despise him, that those in elected office hell I know this from some telling me so that they can’t stand the man.

Onward. Forward. The nation we Carry in Our Hearts is Waiting.

Nick Sones has been involved in politics for nine years and has worked on numerous campaigns in his native state of Pennsylvania. Nick is also an avid runner. Follow him on Twitter @NickSones