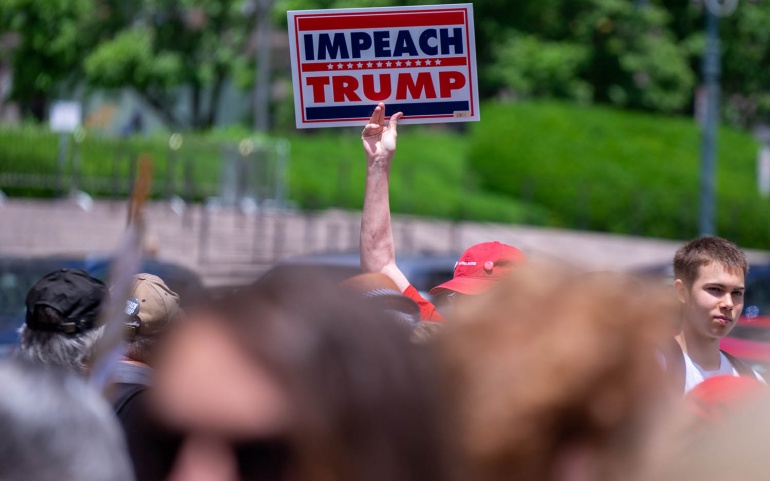 Let’s get this out of the way: Donald Trump has committed impeachable offenses.

It’s clear that Robert Mueller believes Trump obstructed justice. His disregard for the constitution is evident in his steadfast refusal to allow his staff to comply with Congressional subpoenas. He refuses to remove staff who violate the law like Kellyanne Conway. He uses his bully pulpit to attack political enemies and American institutions alike. He profits from foreign governments. And he’s even openly encouraged espionage from America’s enemies. This does not even begin to cover the many, many crimes he committed prior to taking office.

He is not fit to serve as President.

And yet it would be the least progressive thing we could to do impeach him.

Many very smart people argue that the damage done to the Constitution by failing to impeach this president far outweighs the political consequences of doing so. They claim that the oversight duties Congress has over the Executive Branch demand impeachment when a president commits impeachable crimes, and that this must not be a political undertaking.

These arguments are not without merit in an ideal world, governed by coequal branches working as intended. We do not live in that world. For years, Americans’ approval of Congress has been dismally low—it currently stands around 20% (for comparison, around the time of the Clinton impeachment, Congressional approval ratings lived between 40-50%, and occasionally even higher). Americans do not trust Congress to execute its duties in an apolitical, non-partisan, or competent manner. The consequences of impeaching in such an environment could be substantial.

And it does appear that there will be consequences. A recent Quinnipiac poll was enlightening: clear majorities of Americans believe that Trump committed crimes and that a sitting president should not be immune from criminal prosecution, Americans do not believe the House should even start impeachment proceedings against Trump. From a strictly philosophical standpoint, if we believe power flows from the people, the people do not want impeachment. If we think poorly of Congress now, what will we think of them after many months of a steady drone of Trump tweets about the ongoing impeachment hearings being a coup?  What damage will be done to the Constitution when a substantial minority of Americans believe Congress is attempting to overthrow the president for political reasons?  I shudder at the implications.

Beyond the damage to the institution of Congress, however, is the damage to the power of impeachment itself. Make no mistake—there is not one solitary chance that this Senate, under the leader of Trump Senatorial toady Mitch McConnell, will ever vote to remove Trump from office. No matter what any future impeachment hearings discover, his job is safe. So where does that leave us? If a Congress impeaches but fails to remove this president, who has so clearly committed impeachable offenses, does the power of impeachment exist anymore? Future presidents will be free to act with impunity, knowing that, so long as their party holds the majority in at least one house of Congress, they are free from that particular set of ramifications.

Finally, we must consider the actual harm being done to the People. Trump is hurting those who most need government. There is no aspect of society save the wealthiest against whom the Trump regime has not waged a persistent war. Children. The disabled. The sick. The poor. Women. Women. Women. People of color. It just doesn’t stop.  A second Trump administration will surely give him a supermajority that will last for generations on the Supreme Court. Simply put, America cannot afford a Trump win in 2020. Given that we know the American people strongly oppose impeachment, taking that action will endanger those most hurt by this regime and its regressive policies. Impeaching Trump is an act of privilege that will harm most Americans.

If the goal is accountability, all hope is not lost. Just this week, a SCOTUS ruling upheld the “separate sovereigns” doctrine, allowing both federal and state prosecutions to happen for similar behavior. The Southern District of New York has an investigation into Trump and potential criminal activity that is now beyond the reach of his pardon power. However, Department of Justice policy prevents any indictments while Trump is in office. Once he is out of office, there is an excellent chance he will face consequences—but not until that time.