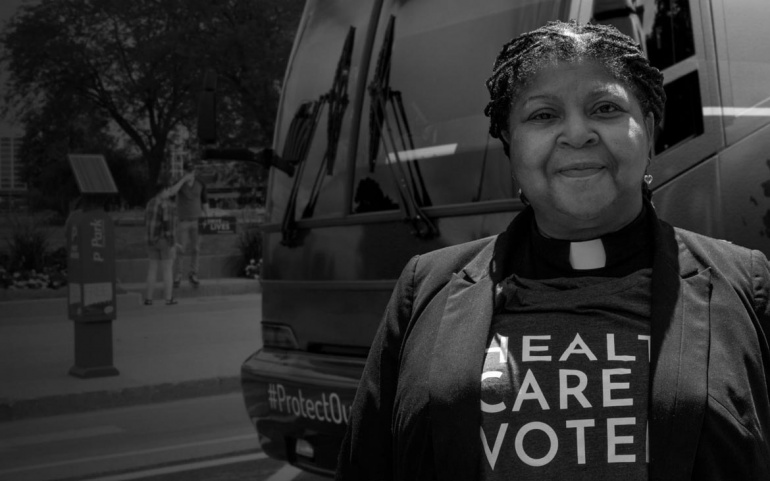 Washington, D.C. — With the Trump administration and Republicans in Congress continuing their reckless efforts to undermine Americans’ access to health care, Health Care Voter is announcing the appointment of six Co-Chairs who have joined the campaign to help mobilize one million health care voters ahead of the 2018 elections. In helping lead the campaign, the new Co-Chairs — former HHS adviser Anton Gunn, President of the Little Lobbyists Elena Hung, actor and activist Alyssa Milano, health care advocate Laura Packard, CAP Action Senior Fellow Topher Spiro, and Protect Our Care Campaign Director Brad Woodhouse — will work to steer and amplify efforts to hold Republicans accountable for voting to strip health care from millions of Americans.

“Last year, we saw voters overwhelmingly reject attempts to undermine the Affordable Care Act with critical wins in Alabama, Maine, and Virginia,”said Anton Gunn, Former Advisor for the U.S. Department of Health and Human Services. “As we move forward, Health Care Voter will help ensure the American people know how their representatives voted and hold them accountable.”

“I believe that our children deserve a childhood. I believe a lot of people don't know that children with complex medical needs can be full of joy and laughter and can thrive with proper support. I believe in the power of stories to change hearts and minds. I believe our elected officials should hear the stories and see the faces of those affected by their votes,” said Elena Hung, President and Co-Founder of the Little Lobbyists. “That’s why I am a Health Care Voter.“

“Americans know that Donald Trump and Republicans in Congress are a direct threat to Americans’ access to quality, affordable health care,” said actor and activist Alyssa Milano. “Over the last year, we have witnessed a wave of people across the country taking action and holding Republicans accountable for voting to strip health coverage from millions of people. This year, we are building upon that grassroots energy to turn the flurry of calls, marches, and rallies into results at the polls. Too many lives are at stake for people to sit this fight out — and that’s why I’m proud to be a health care voter.”

“I am joining the Health Care Voter campaign because I believe everyone deserves access to affordable, comprehensive health care,” said Laura Packard, a health care advocate and storyteller. “The Affordable Care Act saved my life, and the lives of tens of thousands of others. I am working to hold my Congress and President Trump accountable for threatening the care we depend on, and to make sure nobody goes without the health care they need to stay alive and to thrive.”

“Polling and elections from Virginia to Maine show that health care is the defining issue right now for the American public,” said Topher Spiro, Senior Fellow and Vice President of Health Policy at the Center for American Progress Action Fund. “Our task is to mobilize the public to hold accountable elected representatives who still want to repeal health care for millions of Americans. The only way to end the partisan attacks on health care is to change who controls our government.”

“Republicans will not relent in their careless attempts to undermine America's health care,” said Brad Woodhouse, Campaign Director of Protect Our Care. “The Trump administration and congressional Republicans' attacks on affordable health coverage show that Republicans have ignored the will of their constituents to push a partisan political agenda. In 2018, health care voters will once again reject Republicans' outrageous war on health care by voting them out at the ballot box."

The campaign, launched one year out from the 2018 elections, has nearly 200,000 supporters thus far and continues to mobilize constituents through digital organizing, grassroots actions, and voter education. The coalition, which includes more than 40 progressive groups and grassroots organizations, will continue fighting back from coast to coast to end Republican attacks on health care.

Biographies of Our Campaign Co-Chairs

Anton Gunn
Former Advisor for the U.S. Department of Health and Human Services

Anton Gunn is the former Director of External Affairs for the Department of Health and Human Services, where he played an integral role in the implementation of the Affordable Care Act. Following his tenure in the Obama administration, he was a Resident Fellow at the Institute of Politics at Harvard University. Gunn previously served as a State Representative for District 79 in South Carolina, and now is a motivational speaker and leadership coach working with health care organizations to teach leaders how to embrace change, improve engagement and overcome adversity.

Elena Hung is the Co-Founder and President of Little Lobbyists, a parent-run organization that advocates for children with complex medical needs. The families collect and share health care stories from around the country in efforts to educate and raise awareness. They meet with legislators and their staff on Capitol Hill and bring their own children on these visits to help put a face to the lives affected by health care policy. Elena is also a practicing lawyer in DC.

Alyssa Milano is an actor, author, activist, and philanthropist who has starred in hit television series like Who’s The Boss? and Charmed. In her advocacy work, she is fighting to end the world’s AIDS epidemic, raising awareness and cultivating resources for often-neglected tropical diseases, while working to end the culture of sexual harassment. Alyssa is also very passionate about voting rights and encourages Americans all across to the country to register and exercise their right to vote. Now more than ever, Alyssa believes our country needs more patriotism and less partisanship.

Laura Packard is a stage 4 cancer survivor (Hodgkin’s Lymphoma), health care and voting rights activist, and small business owner in Las Vegas, Nevada. She has been blocked by President Trump on Twitter, thrown out of a town hall with U.S. Senator Heller, and her story has reached millions of people worldwide. Laura worked for the AFL-CIO in 2009-10 to help get the Affordable Care Act passed, and now it is saving her life.

Topher Spiro is the Vice President for Health Policy and a Senior Fellow for Economic Policy at the Center for American Progress Action Fund. He leads teams in conducting policy analysis and mobilizing grassroots resistance in defense of the Affordable Care Act. Spiro has regularly advised senior administration officials and members of Congress on policy and strategy. Prior to joining American Progress, Spiro worked on health policy and economic policy in the U.S. Senate, where he helped draft the Patient Protection and Affordable Care Act and the Health Care and Education Reconciliation Act of 2010.

Brad Woodhouse is the Campaign Director at Protect Our Care. A longtime national Democratic strategist, he most recently served as President of American Bridge and previously Americans United for Change. Woodhouse took on these roles after a successful five-year (2008 to 2013) run as a senior strategist for the Obama campaign and Communications Director for the Democratic National Committee (DNC). Woodhouse also served as an adviser to and spokesperson for Senator Jon Corzine (D-N.J.), Communications Director for the Democratic Senatorial Campaign Committee, and in a host of other elected officials, candidates, and causes.