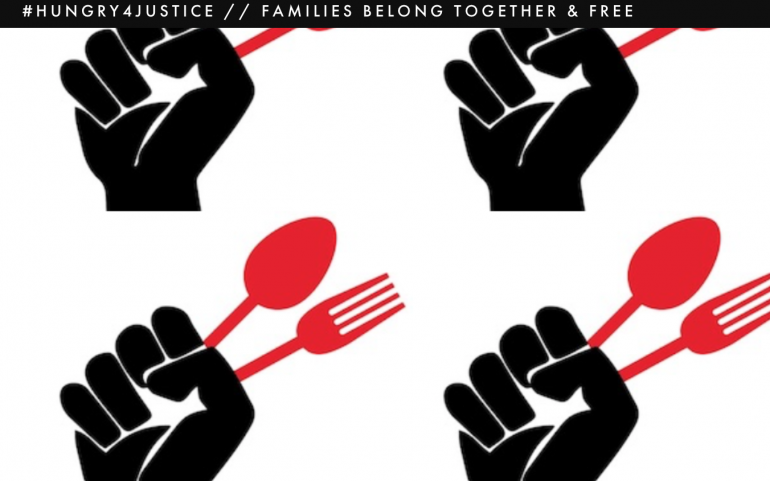 Oakland — After the government failed to meet a court-ordered deadline to reunite immigrant families Thursday, Bay Area parents and grandparents began a three-day hunger strike—the first in a series of fasts across the country calling for separated parents and children to be released together.

“As a mom, I'm supporting the hunger strike because children deserve to be protected no matter where they are born,” said Xochitl Oseguera of Berkeley, CA.

The hunger strike will take place outside Oakland’s Federal Building (1301 Clay St.), beginning the morning of Monday, July 30th, and closing on the evening of Wednesday, August 1st.

The following day, a three-day fast will begin in Sacramento. Organizers plan to continue rolling hunger strikes across the country until their demands are met, with fasts already planned in Santa Cruz, CA, Portland OR, New York City, Chicago, and others.

Last month, U.S. District Court Judge Dana Sabraw gave the Trump Administration a July 26th deadline to reunite all separated families. But more than 700 children remain separated, and hundreds of parents appear to have been deported without their children.

Parents and grandparents in the Bay Area and across the country launched the hunger strikes in order to keep pressure on the government to reunite the remaining families—inspired by mothers inside Port Isabel Detention Center in Texas, who went on a rolling hunger strike after being denied the right to speak to their children.

“The news cycle might move on, but we want it to be clear that we aren’t going anywhere until every single child is back with their family, until every family is free, and has the help they need to move past this trauma. We will see this though and get justice for these families no matter what it takes,” said Anna Tarkov, of Chicago, a spokesperson for Families Belong Together, a network of grassroots activists who are supporting the strike.

“We demand that every migrant family separated by this administration be reunited and released from incarceration. We demand that the families receive support and justice for the trauma inflicted by our government.

“We are parents, we are elders, we are clergy members, we are volunteers, we are teachers. We are ordinary people who have decided that enough is enough. We will not silently watch government-sanctioned kidnapping and the torture of migrant families. We will not sit back and watch families torn apart, babies and toddlers deemed ‘ineligible’ for reunification, children returned to their parents so traumatized they can’t speak, parents denied food, water, and medical care, children and women subjected to abuse and mockery. We stand against the criminalization and dehumanization of immigrant families.

“We will continue our hunger strike and other solidarity actions until our demand is met.”

Said organizer Kavi Chokshi of Portland, OR, “Times like these call for drastic measures to make sure this does not become normal and okay. Separating children from their parents like this is both cruel and immoral. We all need to put politics aside and fight for the soul of America.”

Participants also linked their fast to the broader surge of violence and racism facing immigrants, communities of color, families and children under the Trump Administration. “My fast is my public demonstration of my broken-heartedness,” said Rabi’a Keeble, of Oakland, CA. “My fast is dedicated to change, to hope, and to futures that are better than what we have now.”