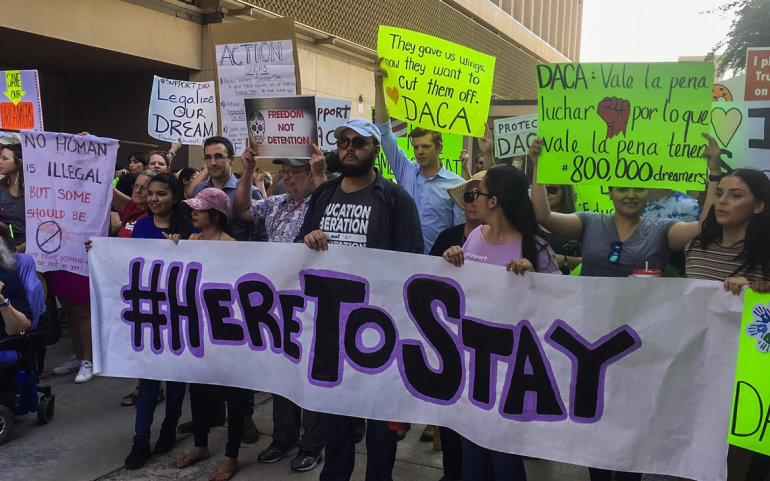 Trump is systematically disappearing millions of people of color — all people of conscience must rise up and resist!

Washington, D.C. - Today, the Trump administration announced the termination of Temporary Protected Status (TPS) for 9,000 Nepalese immigrants living and working in the United States. The Nepalese community joins Sudan, Nicaragua, Haiti, and El Salvador as the latest target in Trump’s decision to uproot and drive away working class survivors of natural disaster back to their countries of origin, despite unstable conditions.

“Our Nepalese sisters and brothers came to this country seeking refuge and the chance to live in safety — but now the Trump administration has announced a plan to shamelessly drive them out.

“It takes wells of resilience to survive a natural disaster and start over in another country, only to be told that if you don’t leave your shelter, you’ll be chased out by another disaster: deportation agents. To the members of Adhikaar and community members from Sudan, Nicaragua, Haiti, El Salvador and Nepal: we see you, we hear you, we love you.

“United We Dream stands in staunch opposition to the Trump administration’s savage decision to terminate TPS for Nepal and calls on Congress to do everything in their power to enact permanent protections for TPS holders and to defund the deportation forces that target these and other immigrant communities.

“With the killing of the Deferred Action for Childhood Arrivals (DACA) program and TPS programs for immigrants for many countries as well as unleashing the deportation force to run rampant through our communities, Trump is systematically disappearing millions of people of color.

“All people of conscience must rise up and resist because this is our home and we are #HereToStay.”

United We Dream is the largest immigrant youth-led organization in the nation, a powerful network made up of over 400,000 members and 48 affiliate organizations across 26 states. UWD’s vision is to build a multi-racial, multi-ethnic movement of young people who organize and advocate at the local and national levels for the dignity and justice of immigrants and communities of color in the United States.

You can find more about United We Dream online at www.unitedwedream.org