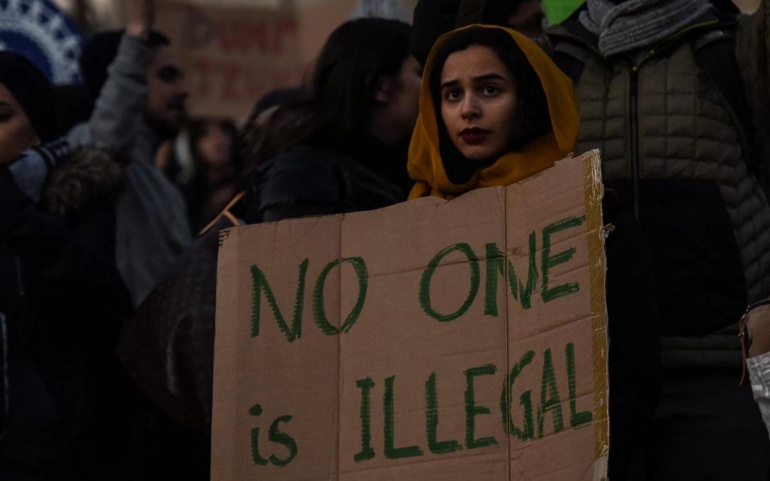 On 24 Sept Trump announced the third version of his travel ban, EO-3, affecting nationals of 8 countries. Part of it went into effect that day, but was to be fully effective on 18 Oct. This ban was swiftly challenged in court, both in Hawai'i and Maryland, and both courts agreed that an injunction (an order blocking the ban) was warranted. Hawai'i issued a Temporary Restraining Order, so there will be further briefing to determine how long the injunction will last. Maryland, on the other hand, issued a Preliminary Injunction, which lasts longer (until the case is actually heard on the merits.)

Yes. When the travel ban litigations started in January, some of the early injunctions applied only in certain jurisdictions, while others were nationwide. The two injunctions from Hawai'i and Maryland are nationwide, so the government is barred from enforcing parts of EO-3 no matter where in the country a banned-country national enters.

Generally, yes - but remember, the injunctions only prevent denial of visas based on the injunctions. If there are other reasons to deny (or delay) a visa, that can still happen. Remember: there are lots of ways to ban people. The "travel ban" is only one tool of many. There's also extreme vetting, administrative processing/security checks, enhanced scrutiny, and rigorous enforcement at the border. A visa is not a guarantee of entry, it's just a prerequisite.

As stated, the Hawai'i ruling is a temporary restraining order (TRO), so further briefing will be required to determine whether it will extend into a Preliminary Injunction (PI). Maryland's ruling is already a PI.

While both injunctions are nationwide, the reasoning behind them differs. First, the courts treat a ban on immigrant visas (people who are entering to become permanent residents) differently from nonimmigrant visas (like tourists, students, temp workers.) Second, the Maryland court distinguished (as the Supreme Court did when it considered EO-2 this past summer) between those travelers with "bona fide relationships" with US persons or entities, and those who without.

Hawai'i reasoned that while the law allows the President to "suspend entry" of classes of non-citizens seeking entry, he must do so after making a finding that such entry would be detrimental to the interests of the United States. While EO-3 went into much greater detail about why nationals from the banned countries would be detrimental to the US, the Hawai'i court found whatever process was detailed in EO-3 wasn't enough. That applied to both nonimmigrant and immigrant visas.

Maryland arrived at the same place, but differently. It reasoned that as for immigrant visas, the President didn't have the authority to discriminate on the basis on national origin. But national origin discrimination is not forbidden as to nonimmigrant visas - as long as religious discrimination was not a motivating factor. So, unlike Hawai'i, Maryland delved into the Establishment Clause (freedom of religion) arguments, and found that EO-3 suffered from the same taint of anti-Islamic animus as did EO-1/2. In a word: Trump's own dogged insistence on this being a Muslim ban sunk his ban, for the third time. (Perhaps he should keep tweeting.)

Hawai'i: Applies to all nationals of all banned countries EXCEPT North Korea and Venezuela (for them, the ban applies) pending further order of the Court. There will be hearings scheduled soon to see how long the injunction will last. The injunction applies whether or not the traveling banned-country national has "bona fide relationships" with a US person or entity.

Maryland: Applies to all nationals of all banned countries EXCEPT:

Given that Hawai'i blocks the ban nationally even for those without bona fide ties to the US, Maryland's restriction will have little effect, so long as Hawai'i's ruling sticks.

Talk to a lawyer, but generally, yes. If you don't have another problem/issue with the visa issuance, you have to have a pending application in order to complain if it's delayed or denied.

My case is stuck in administrative processing. Do these injunctions help me?

Not really. Administrative processing is just another way to delay benefits, and they do disproportionately affect Muslim applicants - even from non-banned countries such as Pakistan. Remember, the injunctions only lift the ban under EO-3. There are still other ways a visa can be delayed or denied.

There are quite a few directions this could go. Hawai'i will soon have further hearings on whether to extend the TRO into a PI. Maryland's order will likely be appealed, as will Hawai'i's. The previous versions of the ban that went to the Supreme Court will (or already have) been mooted out by the issuance of EO-3, so this is the version that will be litigated (unless EO-3 is withdrawn and EO-4 issues.) The injunctions should remain in place in the short-term - few people believe the 9th Circuit or the 4th Circuit (for Hawai'i and Maryland, respectively) will reinstate the ban, though as before, I expect a fractured 4th Circuit decision.

Those who can or want to come to the US should do so now. As before, do not wait for the dust to settle. There's no telling how long this will continue.

I want to get involved. What can I do?

Policies like the Muslim Ban come from the same place as policies like rescinding DACA, ramped up deportations, and lack of immigration reform: namely, a place of hate. Whatever you do, your struggle against this hatred should be shared with those in other affected communities. Use immigration policy to build solidarity. To learn about the Muslim Ban and other initiatives, here are some helpful links: